At the age of three, Kopecky had developed allergy-induced asthma. “My parents were desperate to find an athletic activity that was indoors,” he says. “So they sent me to ballet classes.”

Kopecky also took jazz, musical theater, and tap. The first dance company he ever joined, in fact, was Especially Tap Chicago, while he was still in high school. He credits tap with giving him a unique perspective on ballet. “Rhythmic pattern and timing is more heightened in tap than in ballet,” he points out. “So I’m more aware of those than some dancers who haven’t trained in tap. Tap also helped me become a better contemporary dancer. I can think outside the box, imagine steps in ways other dancers may not, because I was exposed to a wide range of the art.”

After high school, Kopecky decided to enter college instead of jumping straight into a company. In 2010, he got his B.F.A. in dance from Butler University in Indianapolis. Though he says that other dancers are sometimes surprise by his choice, it was the right one for him. “If I’d started dancing right out of high school, I wouldn’t still be dancing. Every dancer reaches a crossroads, and I just wasn’t ready to make dance my life. It’s not a stable career. Your body gives out on you after a certain age. I knew that I could study dance in college, and if I didn’t like it, I could major in something else. I’m a stronger person for having had that experience.”

In 2010, right after graduation, Kopecky joined Ballet San Jose as an apprentice. He’d never even been to California before. “Indianapolis was very gray,” he admits. “Now, I don’t even need a winter coat!”

Kopecky was promoted to the Corps de Ballet in 2011.

James Kopecky in Ohad Naharin’s Minus 16. Photo by Alejandro Gomez.

So far, Kopecky’s favorite role has been his twenty-minute, improvisational solo during Ballet San Jose’s 2014 performance of Ohad Naharin’s Minus 16. The Isaeli choreographer is renowned for creating a dance language known as “gaga.” Kopecky found the form especially appealing because, for him, it broke down the barrier between the audience and the dancer.

“In ballet,” he says, “we’re taught to keep our bodies very controlled. Gaga is more free-form. Like me! It’s outside the box. It’s like yoga. It’s a way to research your own body, to discover how your reactions are different from the reactions of the dancers around you.”

During his solo, Kopecky stood alone on the stage during intermission, looking out at the audience. “People were still talking and coming in and out. I liked it because I was able to do whatever I wanted to. I’ve never had a chance to improvise like that before. I was able to really let go. I was, as dancers say, ‘able to leave it all on the stage.'”

And as for Kopecky’s plans for the future?

He laughs. “I’m just trying to get all my dancing in before I break.”

Ballet San Jose‘s Joshua Seibel has some strong advice for young dancers: never let anyone tell you what you can’t do.

“People probably don’t realize I should technically be wearing hearing aids,” he says.

But Seibel’s partial deafness hasn’t stopped him from dancing. This season, he was even promoted to soloist at Ballet San Jose.

Seibel began dancing at the age of nine at the Yuma Ballet Theater. By thirteen, he was venturing out of Arizona to a summer program at the San Francisco Ballet. “The day we drove into San Francisco was Gay Pride Day,” Seibel laughs. “I was from a small town. I’d never seen anything like that!”

In 2003, Seibel attended Houston Ballet’s summer program and was asked to stay on. “Being a student there was intense. We’d train for twelve hours a day. Then we’d sometimes perform with the company at night. I was fourteen. It was a lot of work and responsibility at a young age.”

After finishing in the semi-finals at the 2006 Prix de Lausanne in Switzerland, Seibel joined the corps of the Houston Ballet. “It was so different from being a student,” he says. “First of all, I was actually getting paid! And I was performing at a much faster pace. Houston does a significant number of shows every year, so I was rehearsing a lot of ballets at once.”

Seibel was also the youngest member of the company. “It was intimidating,” he admits. “I didn’t want to slow other people down.”

In 2008, however, Seibel discovered that he needed ear surgery. Recovery was challenging. At one point, he was even told that he would never dance again.

Seibel took time off, joined Ballet Memphis, and then needed additional surgeries. At one point, Seibel actually decided to enlist in the military instead of returning to ballet.  “Ballet dancers make great military candidates,” Seibel points out. “They are very well disciplined, very physically fit, and good at standing in lines!”

But after yet more surgery prevented him from attending basic training, Seibel took extra time off to decide what he really wanted to do with his life. “Then, one day, I saw my friends perform at Ballet Arizona,” he says. “That was that.” Seibel called Dennis Nahat, the former artistic director of Ballet San Jose, who’d offered him a position in the past.

Seibel joined Ballet San Jose as an apprentice in 2010.

“It was a huge accomplishment for me to make it back to the studio,” he says.

Seibel has made close friends at Ballet San Jose. “When I first arrived, I was so surprised at how much people smiled and laughed during rehearsal. And José Manuel Carreño was the first male dancer I’d ever really admired.  I even recorded one of his performances on VHS back in 2007. He has huge ambitions and goals for Ballet San Jose. It’s so inspiring.”

This year, Seibel has danced the roles of a stomper in In The Upper Room and a sailor in Fancy Free.

“I’ve been so lucky,” he says. “My ears don’t affect my balance or my turns. Now, I don’t even make a big deal out of my hearing.”

“Who wants to play an instrument?” Clifford Rawson asks a group of East San Jose second graders. Hands shoot up around the room. A few minutes later, the children are experimenting with Rawson’s electric piano. A few minutes after that, they’re trying out their first pliés.

“They’re just so enthusiastic,” Rawson marvels. “And for most of them, this is the first time they’ve even had a music or a dance lesson.”

Two years ago, Ballet San Jose began its Education and Outreach program to help disadvantaged schools realize that ballet is for everyone. “Their music and arts programs had been slashed,” Rawson says. “So we decided to try and fill the gap.”

END_OF_DOCUMENT_TOKEN_TO_BE_REPLACED

Amy Marie Briones is truly a home-grown talent. Briones grew up in San Mateo, where she attended the Ayako School of Ballet until she joined Ballet San Jose in 2006. She was only sixteen at the time.

“I wanted to start ballet when I was two year old,” Briones says. “But my mother told me to go and play basketball with my brothers! I finally made it to my first class when I was four, and I wanted to go every day after that.”

Briones and her brothers were homeschooled, which she says was good for her soon-strenuous ballet schedule. It worked so well, in fact, that when Briones attended the prestigious USA International Dance Competition, Dennis Nahat, the former Artistic Director of Ballet San Jose, spotted her right away. “He asked me if I wanted a job,” she laughs. “I told him, ‘Well, I’m only sixteen, but yes!'” 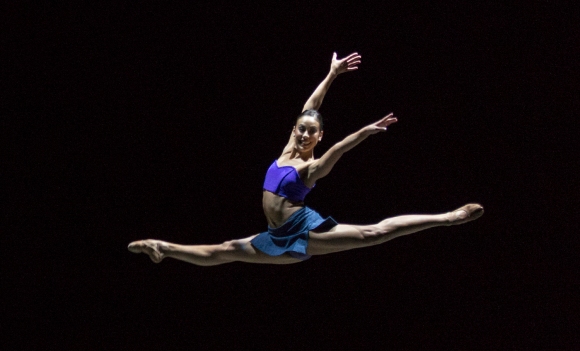 END_OF_DOCUMENT_TOKEN_TO_BE_REPLACED

As we closed the curtain on last weekend’s MasterPieces performance, the Ballet San Jose Company was glowing at their achievement, and the feeling was clearly contagious. Reflecting on their success, here are a few thoughts about the performance from our reviewers.

Carla Escoda of the Huffington Post commented on Ballet San Jose’s performance of Twyla Tharp’s In the Upper Room, stating,

The company threw themselves into that electrifying work with great style and daring – a triumph from start to finish.

END_OF_DOCUMENT_TOKEN_TO_BE_REPLACED

How DO we make all that fog?

Ballet San Jose’s Production Stage Manager Les Reinhardt shared this fun comic from Q2Q Comics yesterday in anticipation of our MasterPieces performance. One of the works on the program, Twyla Tharp’s In the Upper Room, features heavy “fog” on stage, actually termed haze and smoke. Here’s some fun facts about how we get all of that smoke on stage! END_OF_DOCUMENT_TOKEN_TO_BE_REPLACED

After an acclaimed Nutcracker, our dancers are back in the studios rehearsing for our first program of 2015, MasterPieces. This week we are joined by Stacy Caddell, who is working with our dancers to stage George Balanchine’s Theme and Variations along with Sandra Jennings, also back in the studios since December. The ballet along with the company premiere of Jerome Robbins’ Fancy Free and the return of Twyla Tharp’s In the Upper Room make up the MasterPieces program, which will be performed on February 20-22 at the San Jose Center for the Performing Arts. These three works truly live up to the title of MasterPieces, and we are thrilled to be presenting this exquisite and diverse program. Keep reading to learn more about Stacy Caddell. For tickets to see MasterPieces, visit the Ballet San Jose website. Tickets start at only $25!

Stacy Caddell was born in Norfolk, Virginia where she began her dance training at the age of five. She attended the School of American Ballet and joined New York City Ballet at the invitation of George Balanchine in 1980. In 1991, Caddell joined Twyla Tharp’s company. She later toured with Tharp and Mikhail Baryshnikov in the full evening production of Cutting Up. After retiring from the stage, Caddell assisted Tharp at American Ballet Theatre on Known by Heart and at New York City Ballet on Beethoven’s Seventh. From 2002-2005, she served as Dance Supervisor for Tharp’s Tony Award winning Broadway show Movin’ Out. Caddell’s choreographic credits include the HBO series The Sopranos, the opera Aida for the Todi Festival in Virginia, and a ballet, our special waltz, for Ballet Academy East where she is a permanent guest faculty member. Caddell is currently a repetiteur and travels internationally to stage the works of Twyla Tharp and George Balanchine for Twyla Tharp and the George Balanchine Trust respectively.

Pipit-Suksun grew up in Thailand, where ballet was not very popular.  “There’s no professional ballet company in the country,” Pipit-Suksun says.  “And there weren’t even any dancers in my family.”

So how did she wind up choosing ballet? END_OF_DOCUMENT_TOKEN_TO_BE_REPLACED

We’re in the middle of Nutcracker season, but we’re already thinking ahead to the New Year! This week, we were joined in the studios by Guest Stager Sandra Jennings, also ballet-mistress and coach at Mariinsky Theatre. Sandra is working with the Company to stage George Balanchine’s Theme and Variations for Ballet San Jose’s MasterPieces program. MasterPieces will be performed at the San Jose Center for the Performing Arts February 20-22, 2015.

Sandra Jennings was born in Boston and began her dance training at an early age with June Paxman of the Washington Ballet and later with E. Virginia Williams at Boston Ballet. Later Sandra trained with teachers such as Harriet Hoctor, Shanna Bereska and Margaret Gill. END_OF_DOCUMENT_TOKEN_TO_BE_REPLACED

In the Studio: Amy Seiwert

Here to choreograph a new work for Ballet San Jose’s Bodies of Technology program, Amy Seiwert is in the studio and setting her ballet on our Company of dancers. The work will combine the world-renowned innovations and inventions of Silicon Valley with the artistry of groundbreaking dance and choreography, and will premiere at Bodies of Technology at the California Theatre on March 27-29, 2015. Tickets are on sale now at balletSJ.org.

Read more about Amy Seiwert below!

END_OF_DOCUMENT_TOKEN_TO_BE_REPLACED

BSJ Across the Web